Are Dolls just for Girls? 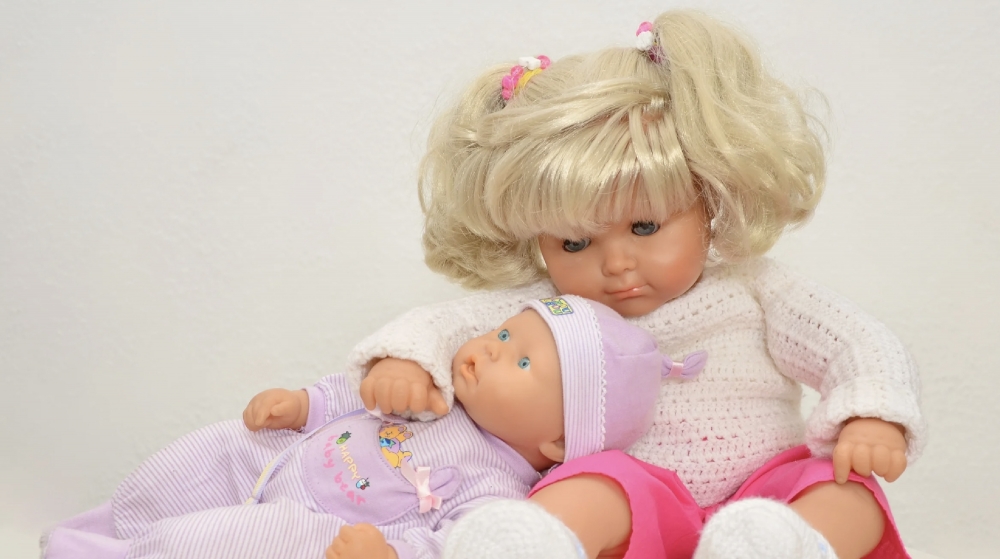 Traditionally, girls have been given dolls to play with and it was frowned on for boys to play with such a ‘girly toy’. Times are changing and in these days of equality, toys are no longer ‘gender specific’, which means that little girls can happily play with toy cars, trains and building blocks. But when it comes to dolls, aren’t they just for girls?

It is well worth considering this question because there are some good reasons why it is not harmful for boys to play with dolls.

It is great for developing imagination

Whether you have a girl or a boy, playing with dolls can really help develop their imagination as they create an imaginary world around the doll who can become almost lifelike to them. When your child is young, their play is totally innocent and it is beneficial to them to experience a wide variety of different toys and crafts.

It is important for your child to have the chance to develop their coordination and fine motor skills and what better way than dressing and undressing dolls with fiddly buttons and poppers? While they are doing this, most children will talk to the doll too which will enhance their conversation and social skills – which in turn, will boost their confidence.

Another big benefit is that by practising on dolls’ clothes, your child will be able to manage the fastenings on their own clothes more quickly.

When your child is playing with dolls , he/she forms a relationship with the doll and learns through play how to care for the doll – this is a great foundation for both sexes as it helps your child will develop into a caring adult.

Dolls for boys are not new!

True the first boys’ doll to be sold was a jointed action figure, but Action Man certainly raised some eyebrows when it appeared in toy shops in 1966. G.I Joe soon followed and this toy was described as a ‘movable fighting man’ and sold in the USA, UK and Australia. 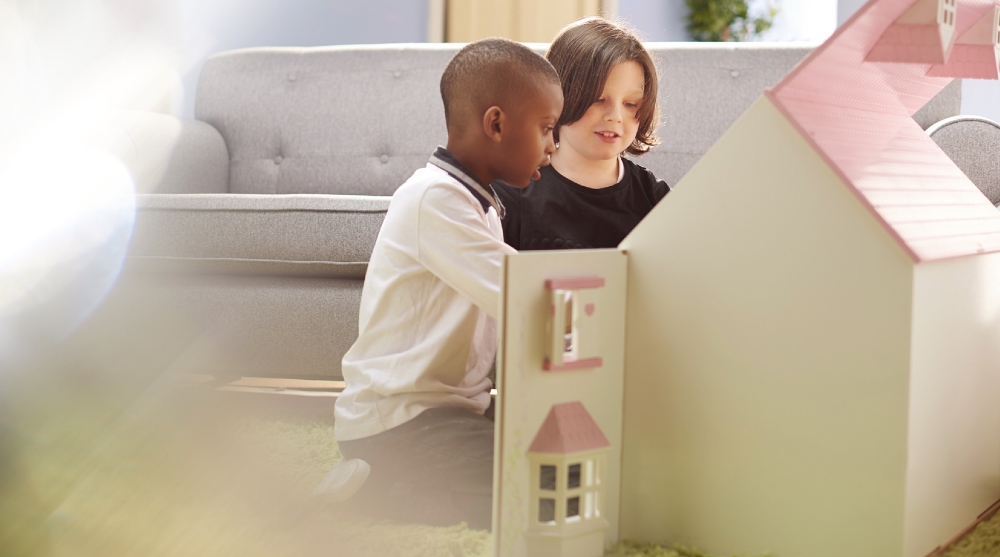 To show that such preferences are not innate in children, a few months ago, New York University and Arizona University conducted a study with 100, two year old children – 50 of each sex and they found that one-third of the time, boys chose ‘girl toys’ more often than girls did. Conversely, ‘boy toys’ were picked by girls more than by boys!

I00 years ago, toys were not gender specific, but by the 1940's manufacturers discovered that parents liked to buy colour appropriate toys for their children. Walking along an aisle of toys today, or watching advertisements on the television, the toys available are strongly advertised using ‘gender marketing’. Interestingly, when a toy is created, not only do the manufacturers gear the toy to be ideal for either boys or girls, this distinction is subtly enhanced by the manufacturers with the choice of colour – bold primary shades for boys and soft feminine shades for girls.

A study conducted in the UK in 2015, confirmed that the marketing of toys was both sexist and limiting. Experts also found that the impact on boys was that they were encouraged to be aggressive and girls to be both passive and ‘nurturing’. There was a campaign group at the time called ‘Let Toys Be Toys’ which campaigned to change the nature of toy advertisements to be gender neutral. 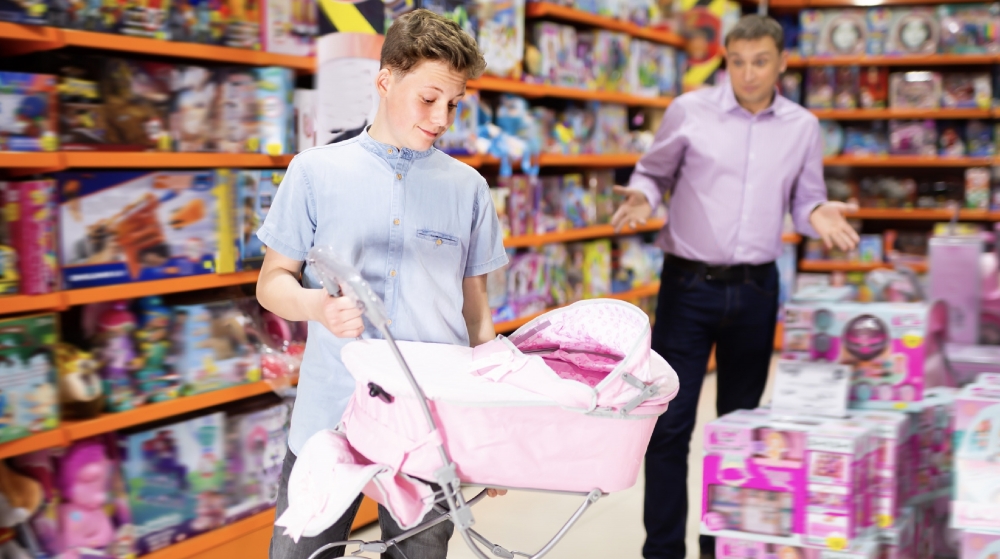 There have been many discussions about whether or not boys can and should play with dolls and many specialists have agreed that boys playing with dolls is good and that because of the sex stereotypes that have prevailed for so many years, little boys need to be supported when they choose to play and display feminine traits such as conveying emotion or caring as these will be traits that will ensure they can build healthy relationships when they are older.

' When children emerge from the womb, they have no idea what gender-based roles are expected of them. Any such beliefs are taught by society and this process begins with discrimination between choosing toys. This is when children start distinguishing each other based on their gender, but this is an outdated and foolish practice that should be eliminated. The marketing of toys should be gender-neutral, and we should gradually do away with this idea being the fundamental line upon which we define the complex and beautiful development of boys and girls' . 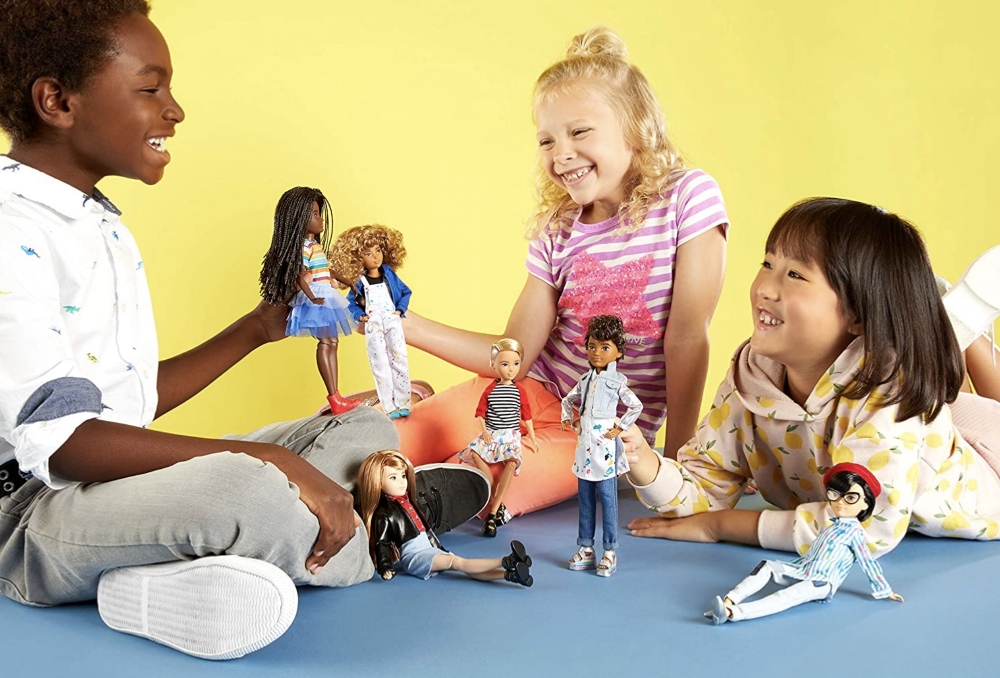 In 2019, as a result of customer surveys, Mattel launched its gender neutral doll Creatable World. The doll could be dressed in varying clothes style and have different hairstyles. The doll has been successful and is an indication that the binary between girls and boys is starting to change.

You can get it here >> Click Here to Buy