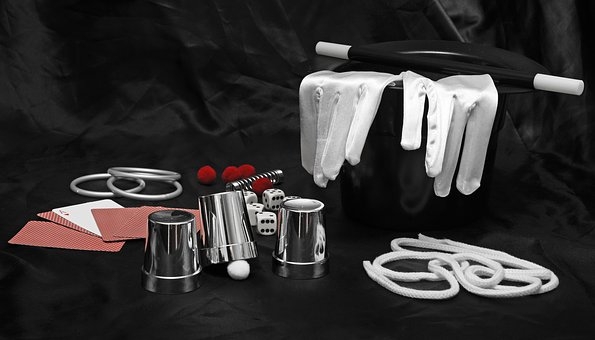 Kids are pleased when they can surprise people --especially adults! Here are five easy tricks that little people can practice and perform, using handy household items.

Parents, take a few minutes to watch the show! A surprised "How did you do that?" will thrill any miniature magician.

• Practice makes perfect.
• A magician never reveals the secret of his or her trick!

Ask a friend to stand in a doorway and place a hand on either side and push hard. Then she should say, "You will now step away from the wall and I will magically lift your arms using my mind." The arms will amazingly rise after the child steps away from the doorway, releasing the pressure.

Grab a spoon and hold it with both hands closed around the handle. Place the bowl of the spoon, open side up, on the table. As you begin to press down on the spoon, allow the handle to slide along the inside of your hand until it reaches the bottom of your palm. This makes it look like the spoon is bending from a spectator’s point of view, even though you are not bending it at all. Your other hand (which appears to be gripping the spoon) is hiding the spoon handle sliding in your first hand.

(Practice with a few bananas before doing this trick!) Using a needle and thread, push the needle through one flat side of a big banana. Pull the needle out, leaving the thread under the skin. Push the needle back through the same hole and under the next flat side. Keep going all the way around. When you reach the first hole, pull the two ends of the thread. This will cut the banana inside the skin. Next, hold up this ordinary-looking banana to your audience and say, "I will say the magic word and the banana will already be sliced when I open it up."

Place three identical bottle tops down on a table. Give someone a small coin and ask them to hide it under one top while you look the other way. When the coin has been hidden, stare very hard at each top. Then pick up the one hiding the coin. You will never be wrong if you know the secret: before you do this trick, pull one hair from your head. Glue about 3 cm. of it to a coin. When the coin is under a bottle top, look for the hair sticking out under it.