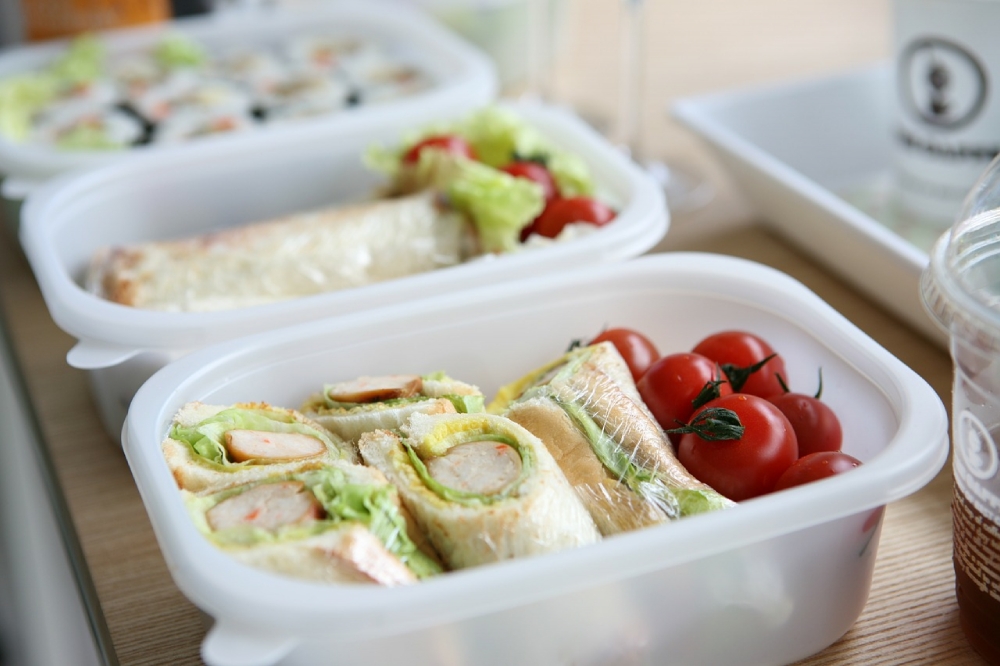 These days it’s so hard to get your kids to eat healthily. They always want crisps or chocolate in their lunch boxes and the same argument happens every morning about not wanting them to eat too much crap. I’ll admit, I often give in, I don’t know whether it’s when the water works come on or when I can’t be arsed arguing anymore but there does come a point I agree. I’m forever trying to find good and innovative ideas to help my kids eat healthier as I’m pretty sure the apple that goes into their lunch box every day goes straight into the bin at lunch time. The thing is, I want them to be impressed with my lunch-making skills. As much as I probably sound pathetic (or don’t to those mums who know what I’m going on about), I want my kids to enjoy what they eat and not have to lie about eating it.

After a few hours online, I found some great lunch box ideas I thought it were only fitting to share with you all. After all, why keep these things to yourself when we can share the love. Hopefully, if you’re having problems with your kid’s lunches then these things will help you, too. The past few weeks they’ve been a lifesaver. 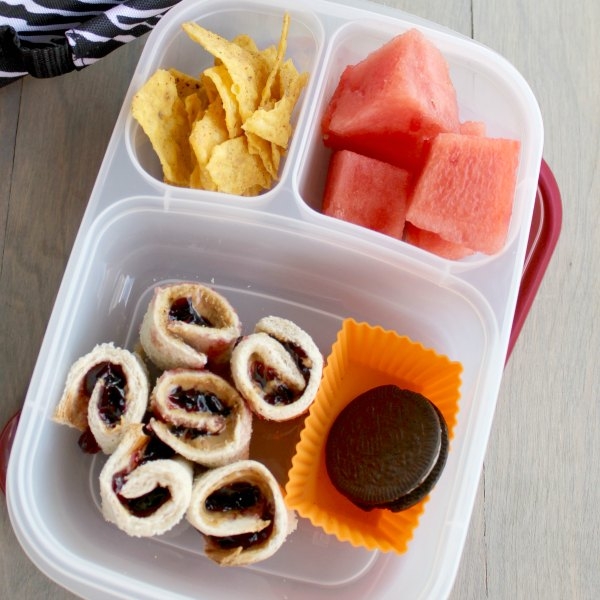 http://www.eatingonadime.com/fun-easy-lunch-idea-pbj-sushi-rolls/
A simple twist on the classic sandwich, these rolls don’t take long to make at all. It’s just like making a regular sandwich except you squash then roll it into a roll shape (like the picture above.) I found that adding a little piece of fruit or veg into the middle of the roll makes the kids eat it as it just goes in with everything else. You can use brown-bread if you’re feeling adventurous but I know that neither of my little ones would touch it, so don’t think I’m expecting miracles from yours either. 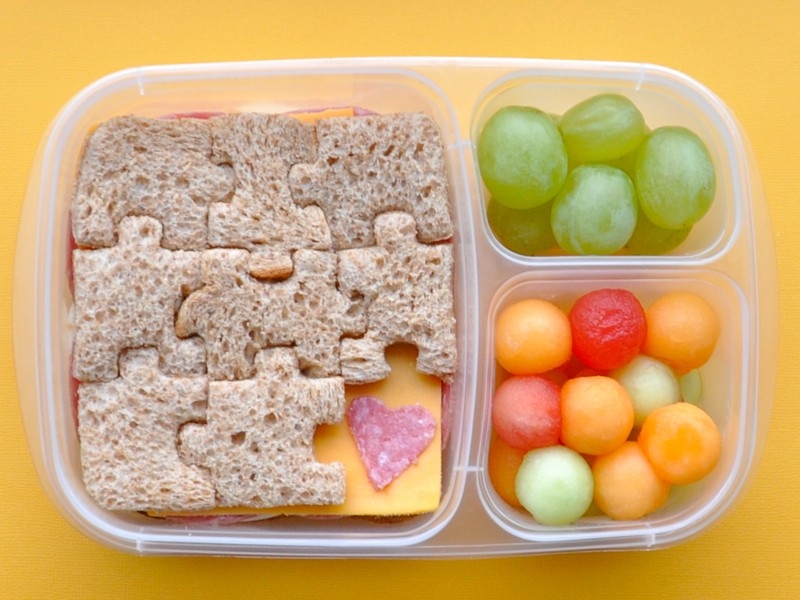 http://bumblebeetoys.com/shop-by/shop-by-brand/lunch-punch/lunchpunch-puzzle.html#.WahtCMiGM2w
I fell in love with this idea as soon as I saw that a puzzle cutter was a thing. My kids love sandwiches but half the time I think they don’t eat them because they’re just bored of having the same stuff every day. I found a puzzle cutter online and as soon as it arrived I started cutting all the sandwiches in the house with it. It’s great for kids, but my boyfriend wasn’t really feeling the fact that he had 9 pieces of sandwich in his lunch box than the usual two. 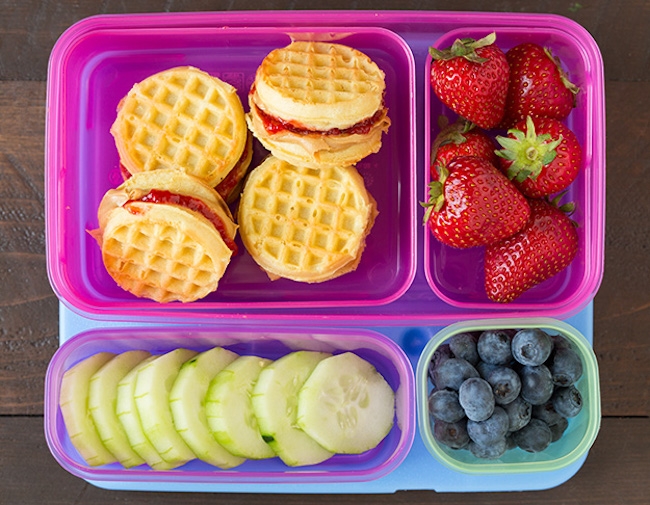 http://eats.coolmompicks.com/2016/08/18/easy-school-lunch-ideas-kids-can-make/
For this idea, you do have to spend a little bit of money but if it’s going to get the kids eating more healthy things then surely, it’s worth it? Well, that’s what I told myself anyway… This great idea is to make mini waffles and eat them instead of a sandwich. The picture above shows them with some jam in between but you can literally put anything, even savoury stuff. I tried this idea out the other day for my little girl, I filled hers with ham and cheese. She loved it. When she came in from school she wanted them for her dinner and as much as I was extremely happy with the results – I couldn’t allow myself to let her have them two meals in one day! 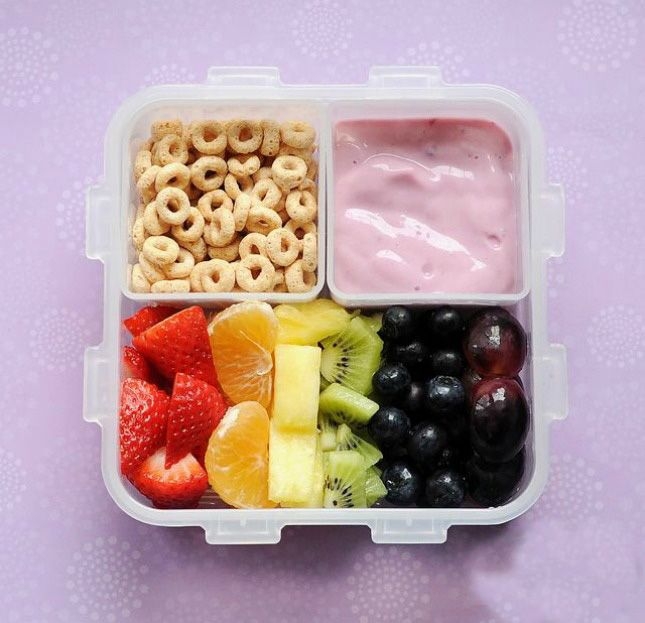 https://www.pinterest.co.uk/thatsmuseless/bento/
Fruit can be fun, sometimes it’s just about the presentation. When I found this picture online I couldn’t believe I’d never thought of it. It’s such a simple but effective way to get your kids loving fruit. Mine like fruit anyway but just never take an interest in it, when this was in their lunch one day all the fruit was gone when they got in. Whether they ate it like they claimed to or whether it ended up in the bin is another story but it gave me a little faith in them finally eating fruit! 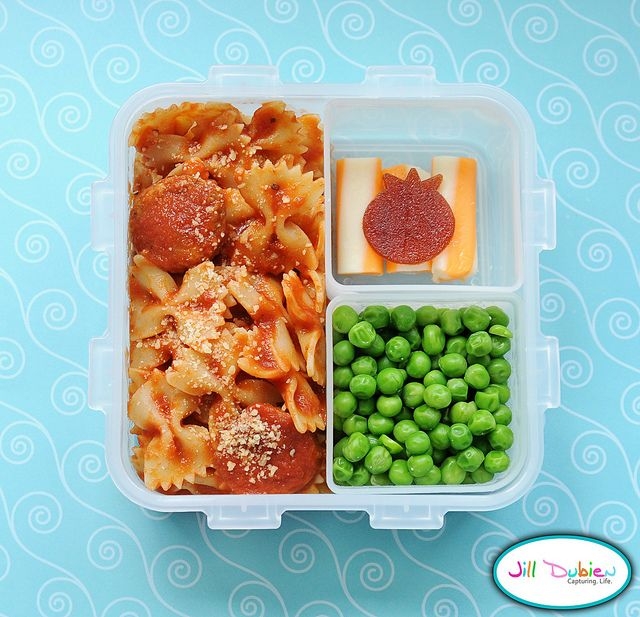 https://www.pinterest.co.uk/bentoandco/pasta-bento/?lp=true
Like I said earlier, my kids get bored of having sandwiches every day. No matter how many pieces you cut it into or what shape they’re in, sometimes they just don’t want one. Something I’ve never really thought about is letting them take some sort of pasta. Veggie or meaty but just cold (and the hot/warm smell of pasta in a lunch bag wouldn’t be a nice one.) I tried one of mine with tuna and sweetcorn pasta with some mayo in and he loved it! This is such a great idea if you just want to switch up the lunch boxes a little so they don’t have to have the same thing every day.

Do you have any ideas that could help mums like me who are looking for healthy alternatives or just regular lunches? Share below anything you think would be helpful!