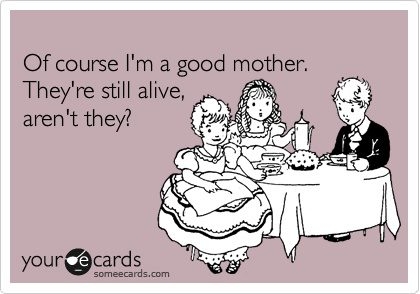 "We've all been there..." she said to me patting my arm knowingly with pity on her face. "Where?" you might ask. Well, let me paint you a picture.

I love taking my son to run errands with me. Typically he loves it too. That's what we were doing--shopping for throw cushions for our new patio. As we moved through the aisles, he politely said, "Excuse me!" and "Hi!" to the people we passed. He was pointing to things on the shelves and asking about them and chatting happily, even saying, "I'm so happy!" (We are learning emotions at school, and it’s the cutest thing ever.)

We were also bumping up on nap time after a two-day stretch of not napping. My sweet angel starting asking for a toy. I said, "Sure, honey. We will go look at them when we are done here if you're still being good." He was sort of good, so we went through toy aisle. He picked a few and we decided on one. I began puttering around a bit more and he tried to open the toy. When I took it away, he threw a fit as I explained that it wasn't ours until we'd paid for it. He was tired and mad, screaming, "I want my toy! I want my toy!" as tears streamed down his face. I tried talking him down as I paced around still trying to complete my errand. That's when the other mum cast her loving pity on me.

I don't think that she meant it to be condescending, or a snide way of saying, "Hey, sub-par mum, you're ruining my shopping experience/time out without my child." But it was hard not to take it that way, even if it was just for a moment.

I was a terrible tantrum thrower. Horrible. I was so bad that my parents got me a calendar for my room and starting marking a huge capital "T" on the dates that I threw tantrums. Then, when their friends came to visit, I had to tell them what the "T" stood for and why I'd thrown that particular tantrum. So, it's sort of my lot in life as a mother to have a kid that throws tantrums. I expected it.

I take these moments--when my kid is embarrassing me by throwing a tantrum, hitting me or spitting in anger/frustration--to try to talk to him and teach him how to behave in public and use his words. I try not to worry too much about what other mothers are saying or what I think they’re thinking, but sometimes it’s hard.

The thing to remember is that we mums are a tribe. We are all part of an elite group who have given up our own bodies to grow another tiny human. No matter how we birthed those tiny humans, how many tiny humans we’ve birthed, how we fed them (breast or bottle) once they were birthed...it’s all miraculous. We are responsible for boring the next generation of teachers, lawyers, doctors, mothers and fathers (no matter if they work or stay home).

I know it can be easy to cast judgement on another mother because they do things differently than you, but we should continually be lifting one another up. That’s what I think the pitying mum was doing to me today. Instead of passive-aggressively shaming me, she was saying, "Hey, girlfriend. I got you. Don’t stress. It happens to everyone and kids can be tough. You just keep doing you, and me and all these other ladies here will be silently sending you good vibes."

What’s that saying? Be kind to everyone you meet for you know not what battles they’re facing. That’s so true for us mums. There is a lot of pressure in raising tiny humans to be good people. People that not only you love, but that you actually like, and other people like, too. And there are so many outside influences weighing on how we raise our tiny humans--social media, world news, peer pressure (both for them and for us)--that the last thing we need to do is pile it onto one another.

Love your tribe. I sure am glad you’re part of mine.